Culture Article of the Month 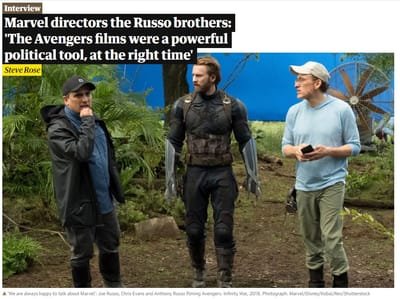 Marvel directors the Russo brothers: 'The Avengers films were a powerful political tool, at the right time'
Steve Rose
5 March 2021


The men behind the highest-grossing films of all time on how superheroes can instruct world leaders, and changing direction to make a bleak experimental opioid drama – starring Spider-Man


Where do you go after you have just directed the highest grossing movie in history and your past three movies brought in a combined haul of $6bn? Only two people have had to grapple with this question. Joe and Anthony Russo have spent nearly a decade immersed in the Marvel universe, weaving together a tangle of plot strands, marshalling an enormous cast, staging ever more spectacular action scenes, and bringing the whole saga in to land against gale-force headwinds of expectation.


As well as the concluding Avengers Endgame and Infinity War, the Russos directed Captain America: The Winter Soldier (2014) and Captain America: Civil War (2016), the latter of which introduced Chadwick Boseman’s Black Panther and Tom Holland’s Spider-Man. On the one hand, you could say they have won Hollywood, but now they face the challenge of life after Marvel, which could be even tougher.


Has there been a post-Marvel moment of existential crisis? “We didn’t really have time for that to be honest with you,” says Joe, the elder Russo (short grey hair, a little stockier, a touch of the tough guy about him), from their Los Angeles production offices. He is keen to move right on to their new movie, Cherry, adapted from a novel by Nico Walker and starring Tom Holland. “We came across this book while were still immersed in Endgame. So we hadn’t really spent a lot of time thinking about what we would do afterwards. The book just really struck us.”


Is it painful to talk about the Marvel experience? “No, not at all,” laughs Anthony from a separate room in the same office. Slimmer, with dark hair and glasses, he looks like he could be Tom Holland’s dad, which is apt. Joe earnestly agrees: “We’re always happy to talk about it. I mean, it was a very fulfilling part of our careers. Great experience with the Marvel folks. We prioritise quality of life as much as we prioritise quality of work, and they were a high quality of life.”


Maybe we’ll come back to Marvel. As a declaration of how much the Russos have moved on, Cherry verges on overstatement. It’s as if they cashed in theircarte blanche and decided to do all the movie genres at once. Following the fortunes of a disaffected Cleveland youth, over nearly two and a half hours, Cherry begins as a teen romance, then segues into an Iraq war movie, then an addiction movie, then a crime thriller with a dash of prison drama at the end for good measure. They seem to be covering all the bases stylistically, as well. There are operatic slo-mo shots, snappy montages, grand tracking shots, epic action scenes (naturally), energetic camerawork, even a shot from the point of view of Holland’s rectal cavity.


Cherry is, improbably, based on a true story – a fictionalised account of Walker’s own experiences. As such, rather than throwing genres together, the story underlines the causal links between them, from heartbreak to military service to post-traumatic stress disorder to addiction (first to the prescribed opioid OxyContin, then to heroin) to crime. “Even though Cherry’s journey is unique,” says Anthony, “at one level, it’s so representative. That the medical system would, number one, turn to [opioids] as an answer for PTSD. And then second, allow drug companies to maximise sales of their drug by pushing it on people. That happened over and over and over again.”


Cleveland is the Russos’ home town. Joe describes it as “the Newcastle of the US”, a post-industrial, working-class city that fell on hard times. “It has been made fun of for years,” he says. “We had an inferiority complex growing up in Cleveland, because the river caught on fire, the mayor’s hair caught on fire, our sports teams lost every championship.” Walker is a generation younger than the Russos (they are 51 and 49) but their biographies overlap: they grew up in middle-class families, in the same neighbourhoods and went to similar private schools. Walker even worked in the same restaurant Joe had done 10 years earlier (it features in a scene in the movie). “There’s a level of detail there that we’re very familiar with,” Joe says. “And there’s a sense of existential blight that we’re also very familiar with.”


Cleveland has been a centre of the US’s opioid crisis, which has been overshadowed and exacerbated by the coronavirus pandemic but is continuing. Most people from the city have been affected, the Russos say, themselves included. “It’s a profoundly sad experience to be unable to help someone that you love deeply,” says Joe. “We lost a younger cousin to opioids, and it was a very, very painful funeral for us. And for his mother, our cousin, who we’re very close to. We’ve lost good friends from our childhood.”


What helped keep the Russos from that path was their close-knit, politically engaged, Italian-immigrant family. Their father, Basil, was a democratic city councillor. “So we were on the sidelines of a lot of political debates as children,” says Joe, “watching our father, going to churches with him, where he was speaking to constituents and talking about how to save the city from bankruptcy.”


The brothers went their separate ways to study, then joined forces to launch their film careers. “We believe in this concept called the mastermind principle,” says Joe, “which states that two minds are not doubly better than one; they’re exponentially better. We believe that we’re at our best when both of our brains are on the story at hand, and the day-to-day, creative decisions that get made when you’re executing a film.” One insider characterises Joe as “the strategist and general”, and Anthony as “the philosopher”.


Their self-financed debut, Pieces, was a typical low-budget 90s indie comedy, but Steven Soderbergh saw potential in them. He and George Clooney produced their next movie, the heist comedy Welcome to Collinwood (which was also set in Cleveland). Before Marvel, apart from another middling comedy, You, Me & Dupree, they primarily worked in television, including the hit sitcoms Arrested Development and Community. (There are numerous cast members in small cameos and easter eggs from both series to be found in their Marvel films).


Like Soderbergh, the Russos embrace a “one for them, one for me” approach, doing mainstream movies to fund less orthodox projects, such as the Arab-led war movie Mosul and the Australian horror Relic. Thanks to the Avengers movies, it’s looking more like “one for them, 10 for me” these days. They also seem to be running some kind of superhero rehabilitation scheme. As well as Holland, they worked with Chris Hemsworth (Extraction), and Chadwick Boseman (21 Bridges). Next, they are directing Chris Evans in a spy thriller, The Gray Man, written by their Marvel collaborators Christopher Markus and Stephen McFeely, while Paul Bettany will reportedly play Alexander Nix in their dramatisation of the Cambridge Analytica affair. It’s starting to look like Avengers Reassemble. They have got plenty more in the pipeline: new spy series Citadel with Priyanka Chopra; a sci-fi co-produced with the Obamas; and a live-action reboot of Disney’s Hercules (which sounds like “one for them”).


Early reviews of Cherry have not been ecstatic, it must be said. A common complaint has been that it feels inauthentic, as if drawn from other movies, but to the Russos, that’s the point: “The character cannot separate his life from its fictional influences,” says Joe. “He’s trapped in artifice, and that’s reflected in the execution of the movie.”


The Russos aren’t trying to be arthouse auteurs, it seems; they are more interested in injecting their sincere political beliefs into mainstream movies – at which they have inarguably succeeded. If you were going to counter Martin Scorsese’s now-infamous contention that superhero movies are closer to “theme-park rides” than “cinema”, the Russos’ Marvel movies would be exhibits A to D. Captain America: The Winter Soldier, in particular, critiqued the post-Snowden US landscape of state surveillance and counter-terrorist overreach. “This isn’t freedom; it’s fear,” says the recently defrosted superhero, who flips from patriotic asset to radical insurgent. (Meanwhile, Scorsese was making a movie about Jesuits in 17th-century Japan).


Beneath the spectacle and spandex, their subsequent Marvel movies grappled with similar “political thematics”, as the Russos put it. Their Avengers saga could be more reflective of their times than they are given credit for. “Those movies are very much about what went on in this country over the past four years,” Joe asserts. “They were about standing up for what you believe in, irrespective of the cost, and I think we’re losing sight of that. For some reason, in the UK and in the US, some of the worst people were being attracted to politics and were representing us collectively. It was affecting our collective mental health, and it was reflecting poorly on our character. We believed strongly that the reach in those movies was so significant that they could be influential in helping people make potentially make better decisions. We thought that they were a really powerful tool, at exactly the right time.”


Rather than the Russos struggling without Marvel, it’s Marvel that could struggle without the Russos. The good news is, they don’t rule out a return to that world. “There will always be a bigger Russo brothers commercial movie on the horizon,” says Joe, “because it’s towing in its wake a lot of socially conscious and politically conscious films.” The Russos don’t need to “move on” anywhere; they seem perfectly happy where they are.


Cherry is released digitally in the UK on 12 March