Finance Article of The Month 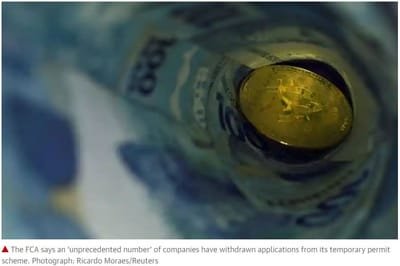 Dabble /ˈdab(ə)l/
Take part in an activity in a casual or superficial way.

Up to 50 companies dealing in cryptocurrencies such as bitcoin may be forced to close after failing to meet the UK’s anti-money laundering rules.


The Financial Conduct Authority, the City regulator, announced on Thursday that an “unprecedented number” of companies had withdrawn applications from a temporary permit scheme that allowed firms to continue trading until the regulator could green-light or formally reject their operations.


A “significantly high number” of those firms had been warned that they were falling short of anti-money laundering standards intended to stop criminals and terrorist groups from disguising the source of their money, usually through a complex web of financial channels.

Firms that pull out of the permit process are required to stop trading immediately, until they can meet the watchdog’s standards and are admitted to the formal list of registered businesses.


Companies that refused to shut down could face fines or legal action by the FCA.


A number of regulators across the globe have been cracking down on crypto assets, which have been linked to money laundering and black market dealings. Last month, Chinese regulators banned banks and payment firms from offering clients any services involving cryptocurrencies, and warned of the risks linked to trading crypto assets.

The governor of the Bank of England, Andrew Bailey, has told investors they should be prepared to lose all their money if they dabble in cryptocurrencies.


The European Central Bank has compared bitcoin’s meteoric rise to other financial bubbles such as “tulip mania” and the South Sea Bubble, which burst in the 17th and 18th centuries.


However, banks including Goldman Sachs and Standard Chartered have launched their own cryptocurrency trading desks to take advantage of their rapid growth.

Only five crypto asset firms have been admitted to the FCA’s formal register so far. Another 90 firms are being assessed through the temporary permit scheme, which has been extended by nine months to allow the FCA to fully review all of the applications.


While a further 51 have withdrawn their applications, some may not be covered by the FCA’s rules to register, meaning not all of them will be forced to shut down.


Others will have an opportunity to re-apply, though they are required to cease trading until they are formally admitted to the permanent register, since the deadline for registering for the temporary scheme has now passed.