International Law Article of the Month 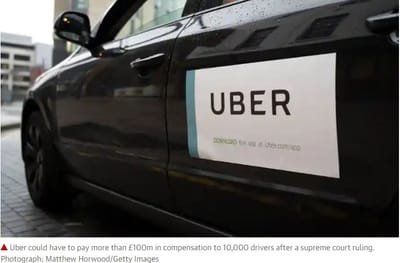 Landmark /ˈlan(d)mɑːk/
An event or discovery marking an important stage or turning point in something.

Enshrined /ɪnˈʃrʌɪn,ɛnˈʃrʌɪn/
Preserve (a right, tradition, or idea) in a form that ensures it will be protected and respected.

Uber has been accused of using “loaded questions” in a consultation with drivers, after a landmark court ruling handed workers rights to improved conditions.

The firm may have to pay out over £100m in compensation to 10,000 drivers, after the UK supreme court ruled last week they are entitled to holiday pay, a company pension and the national minimum wage. Uber has previously argued that its 60,000 UK drivers are self-employed independent contractors with limited employment rights.


A questionnaire, sent out via the Uber drivers’ app following the ruling, offers a limited choice of answers on questions about benefits and flexible working without mentioning holiday pay or the national minimum wage – both of which the court found Uber drivers were entitled to.


Steve Garelick, a regional organiser for the GMB union, said: “These are loaded questions to get the answer they need.”


He said the way the questions were posed suggested that Uber could be hoping to lobby government for a change in the rules to suit their existing working practices rather than changing their practices to fit the rules.


James Farrar, one of the lead claimants in the supreme court case and general secretary of the App Drivers & Couriers Union, said: “The driver survey is a crude attempt by Uber to divert attention away from their obligation to abide by the supreme court ruling and immediately implement the statutory protections of worker status for all their drivers.


“Instead, Uber is setting up the cruelly manipulative false choice between fairness and flexibility by loading the survey with bias and leading questions.


“Uber should focus on how it can best quickly implement the ruling rather than set up an alternative set of improvements based on a set of assumptions derived from a biased survey.”


One questions asks, for example: “When deciding to whether to earn on the Uber app which best describes you?


Nigel Mackay, a partner at law firm Leigh Day, is representing more than 1,000 drivers seeking compensation for missed holiday pay in the wake of the supreme court ruling.

He said that the question on flexibility was presented “as there being a binary choice between flexibility or benefits (again, without even mentioning some of the most important benefits), whereas in reality it is not a choice between the two. They could maintain flexibility for drivers and provide the benefits.”


An Uber spokesperson said: “We are currently studying the details of the judgment and listening to all active drivers to help us shape the future of flexible work. We will share the conclusions of this process in the coming weeks.”


A source close to the company said it would respect the supreme court verdict and had discussed issues such as holiday pay at roundtable discussions with small groups of drivers this week.


But Mick Rix, national officer of the GMB, said: “They’re leading drivers up the garden path.


“Worker status does not mean drivers losing flexibility, it means they will get the legal rights the courts have ruled they are entitled to.”

Mackay said individuals’ opinions on benefits were irrelevant as the rules were enshrined in law and the research appeared to be set out for PR purposes.


“For example, where they ask drivers what they would like to see more of, they don’t refer to paid holiday/minimum wage. It seems that this is so that, down the line, they can say that drivers are not interested in holiday pay or the minimum wage because they carried out research and the most popular benefits were other things,” Mackay said.