Sport Article of the Month 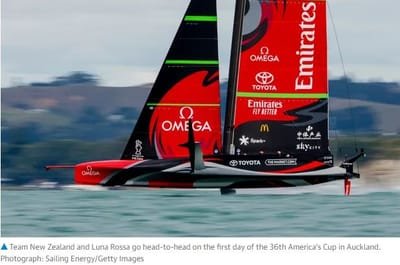 Team New Zealand and Luna Rossa were all square at 1-1 after the first two races of the 36th America’s Cup off the coast of Auckland on an opening day that promised a thrilling contest for the oldest trophy in international sport.

Defender TNZ won the first race in the best-of-13 match by 31 seconds after Luna Rossa fluffed the start but the Italian challengers charged back to take the second by seven seconds.

TNZ skipper Peter Burling conceded his team had not been at their very best in their first races for some three months, particularly at the start of the second race.

“Looked a little bit rusty on that one but it was good to get back a bit on them and really show that we have good downwind [speed],” the Olympic champion said.

“Felt like the boats were pretty even today (in terms of speed), I felt like you just had to do the right things ... we made a few mistakes with tacks and stuff.... yeah, you could say it’s rust.”

The first day of racing, which was delayed for four days by a coronavirus lockdown in Auckland, confirmed that the battle for the ‘Auld Mug’ would at least be a contest after rumours that TNZ had far superior speed.

The Italians were swept 5-0 the last time they took on the New Zealanders for the America’s Cup in Auckland 21 years ago.

“I thought the boys sailed a great race then,” Luna Rossa’s Australian co-helmsman Jimmy Spithill after the second race. “We had obviously had quite a lot of manoeuvres, quite a lot of tacks and yeah, just kept the boat going well. It was a good sign of strength to bounce back after that first one.”

Spithill, who won two America’s Cups as skipper of the Oracle team, overplayed his hand at the start of the opening race, steering close to TNZ’s Te Rehutai before having a protest denied as the rival boat took a quick lead.

Luna Rossa were able to cut the deficit to 17 seconds by the fourth turn but TNZ were stronger over the last two legs and crossed the line comfortably ahead in 23 minutes and eight seconds.

Spithill got the start right in the second race and Luna Rossa had a 24-second lead at the halfway point before TNZ showed good downwind speed to narrow the gap significantly.

Luna Rossa held on to cross the line first in 24:41 to even up the match heading into Friday’s third and fourth races.

“It was one of those race tracks where I felt the lead boat had the advantage,” Spithill added. “It’s great to be competitive, great to get a race win and looking forward to tomorrow.”

From Friday, the racing will continue every day until one of the teams have won seven races.